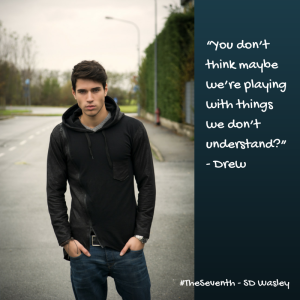 It had been a bad weekend. I didn’t want to think about it. I buried my face in a book; the Thomas Hardy I’d picked up at the Granary Market book exchange. I was trying to get into that zone where nothing could distract me, but the other kids in Homeroom were being particularly noisy.

No one was talking to me; I’d been liberal with the black and white warpaint that morning, plus I’d put on an extra spiky collar and had even considered some satanic chains; except that Patience always freaked when I wore those. I thought I might get some facial piercings. Most people wouldn’t even look at your face for any length of time if you had piercings there. That could be useful.

There was a new kid in class. I didn’t look at her but I knew it was a girl and figured she must be pretty because Gabe was using his manly, friendly, I’ll show you the ropes voice, and Cassie was being a bitch. Despite my best efforts to shut them out, I could hear them talking about their gifts – covertly, of course, but the four of us in the room who were in on the gifted thing knew what it was about. Gabe joked with Cassie to “call off the dogs,” and then Ms Deering and Gabe had some oh-so-witty repartee about how talent is often accompanied by ego.

Read the rest of this short story about Drew’s first introduction to Mimi here on Love, Laughter and Friendship book blog. Tip: scroll down the find the story.